Nuremberg (German: Nürnberg) is a city in the German region Franconia. It is situated on the Pegnitz river and the Rhine-Main-Danube Canal and is Franconia's largest city. The urban area also includes Fürth, Erlangen and Schwabach with a total population of 763,854. The "European Metropolitan Area Nuremberg" has ca. 3.5 million inhabitants. Nuremberg was, according to the first documentary mention of the city in 1050, the location of an Imperial castle between the East Franks and the Bavarian March of the Nordgau. From 1050 to 1571, the city expanded and rose dramatically in importance due to its location on key trade routes. 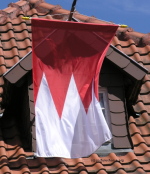 HD resolution in fullscreen mode of the video

Nuremberg Castle (German: Nürnberger Burg) is a historical building on a sandstone rock in the north of the historical city of Nuremberg, Germany. It comprises three sections: the Imperial castle (Kaiserburg), some buildings of the Burgraves of Nuremberg (Burggrafenburg), and the municipal buildings of the Imperial City at the eastern site (Reichsstädtische Bauten). The castle, together with the city walls, is considered to be one of Europe's most formidable medieval fortifications. Archeological investigations during recent years indicate that the place was already settled around the year 1000, although this has not been backed up by any documentary proof. Nuremberg was first recorded in 1050, when Henry III visited the town, but there is no specific mention of the castle. The castle does not appear in any documents until 1105. In 1140, King Conrad III started building a second castle on the site, to be used as a royal residence.

Die Meistersinger von Nürnberg "The Master-Singers of Nuremberg" is a music drama (or opera) in three acts, written and composed by Richard Wagner. It is among the longest operas commonly performed, usually taking around four and a half hours. The story is set in Nuremberg in the mid-16th century. At the time, Nuremberg was a free imperial city and one of the centers of the Renaissance in Northern Europe. The story revolves around the city's guild of Meistersinger (Master Singers), an association of amateur poets and musicians who were primarily master craftsmen of various trades. The master singers had developed a craftsmanlike approach to music-making, with an intricate system of rules for composing and performing songs. The work draws much of its atmosphere from its depiction of the Nuremberg of the era and the traditions of the master-singer guild. One of the main characters, the cobbler-poet Hans Sachs, is based on a historical figure, Hans Sachs (1494–1576), the most famous of the historical master singers. Die Meistersinger von Nürnberg occupies a unique place in Wagner's oeuvre.

St. Lorenz (St. Lawrence) is a medieval church of the former free imperial city of Nuremberg in southern Germany. It is dedicated to Saint Lawrence. The church was badly damaged during the Second World War and later restored. It is one of the most prominent churches of the Evangelical Lutheran Church. The nave of the church was completed by around 1400. In 1439, work began on the choir in the form of a hall church in the late German Sondergotik style of Gothic architecture. The choir was largely completed by 1477 by Konrad Roriczer, although Jakob Grimm completed the intricate vaults. In the choir one can find the carving of the Angelic Salutation by Veit Stoss, and the monumental tabernacle by Adam Kraft. The latter includes a prominent figure of the sculptor himself. The building and furnishing of the church was cared of by the city council and by wealthy citizens. This is probably the reason why the art treasures of St. Lawrence were spared during the iconoclasm during the Reformation period. Despite St. Lawrence being one of the first churches in Germany to be Lutheran (1525), the wealthy citizens of Nuremberg wanted to preserve the memory of their ancestors and refused the removal of the donated works of art.

Frauenkirche (Church of Our Lady)

Albrecht Dürer 21 May 1471 – 6 April 1528) was a painter, printmaker and theorist of the German Renaissance. Born in Nuremberg, Dürer established his reputation and influence across Europe when he was still in his twenties, due to his high-quality woodcut prints. He was in communication with the major Italian artists of his time, including Raphael, Giovanni Bellini and Leonardo da Vinci, and from 1512 he was patronized by emperor Maximilian I. His vast body of work includes engravings, his preferred technique in his later prints, altarpieces, portraits and self-portraits, watercolours and books. The woodcuts, such as the Apocalypse series (1498), retain a more Gothic flavour than the rest of his work. His well-known engravings include the Knight, Death, and the Devil (1513), Saint Jerome in his Study (1514) and Melencolia I (1514), which has been the subject of extensive analysis and interpretation. His watercolours also mark him as one of the first European landscape artists, while his ambitious woodcuts revolutionized the potential of that medium. Dürer's introduction of classical motifs into Northern art, through his knowledge of Italian artists and German humanists, has secured his reputation as one of the most important figures of the Northern Renaissance. This is reinforced by his theoretical treatises, which involve principles of mathematics, perspective and ideal proportions.

The wasp nest is peaceful, if one leaves it in peace

Do you like this page? Put links to Nuremberg Germany: